The renovations of Hansakortteli in Turku, Finland started in 2016 and were completed before the start of the Christmas season. As well as boosting the attractiveness of Hansakortteli, the extensive renovations also improved accessibility and energy efficiency. In addition, the new light artwork ‘Cloud’ illuminates the Hansatori Square and adapts itself according to the seasons and different events.

Hansakortteli, which was opened in 1988, is now serving the public once again in its new, renovated form. The €15 million renovations have made Hansakortteli more pleasant, improved accessibility and made it easier to find one’s way around. Approximately €8 million was invested in renovating the rental premises, while €1,8 million was invested into improving the energy efficiency and building technology of the shopping centre.

“The renovated Hansakortteli will increase the attractiveness of the entire centre of Turku. The requests for easy access and cloakroom options, for example, have been considered in the renovation work. We have already received a lot of positive feedback on the new premises and interior both from customers and our tenants,” explains Timo Palviainen, director of the Hansakortteli Shopping Centre.

Completely new, while appreciating the old

The architectural design of Hansakortteli was carried out through close cooperation between Design Office Amerikka and the Turku-based Schauman Architects Ltd.

“The renovations were made with respect for the old and with appreciation for the unique nature of the properties. All themes are linked to the history of Hansakortteli, the Hanseatic League and Turku as an historically significant marketplace. In addition, visual references to shipping and general commerce can be found in the interior,’ says Janne Helin from Schauman Architects Ltd.

"In the renovations, it was most important to develop the spaciousness and walkways within Hansakortteli. We have removed visual obstacles and replaced the signage in order to make things easier to find. In addition, movement around Hansakortteli has improved significantly, as we have added new corridors, escalators and elevator connections,’ says Olli-Pekka Vaija from Amerikka Design Office.

“Hansakortteli has set itself the task of reducing its energy consumption annually by the equivalent of approximately 230 apartments, and all 2000 employees at the shopping centre have committed to this goal,” Palviainen adds.

“As a result of the renovations we now have some newcomers, particularly in the branch of cafés and restaurants, men’s fashion, and home and interior decoration stores. In addition, several shops already operating in Hansakortteli, such as Marimekko, were provided with new facilities in which new concept designs have been carried out,” Palviainen explains.

The renovations are crowned by the new light artwork entitled ‘Cloud’, which hangs over Hansatori Square. It interprets the colouring and atmosphere of the seasons, and moulds itself according to the daily activities of the shopping centre. The work was designed by lighting designer Tuomas Honkanen.

“The Cloud light artwork is a new eye-catching feature in Hansakortteli and we intend to make different use of it in our events. For example, we will modify the colouring of the artwork according to different themes and festivities,” says Palviainen.

According to Palviainen, the renovation work has already had a positive impact on visitor numbers.

“Since August, the number of visitors in Hansakortteli has been growing, and customers clearly spend more time than before in the shopping centre. The new facilities have attracted new operators and the interest for Hansakortteli in general has increased significantly,” Palviainen says.

Small finishing works will be carried out in early 2020 before the actual opening ceremonies in the spring.

Hansakortteli’s sales totalled about €220 million in 2018 and it attracted approx. 12 million visitors. More than 130 stores and service providers operate in Hansakortteli Shopping Centre employing a total of about 2000 people. 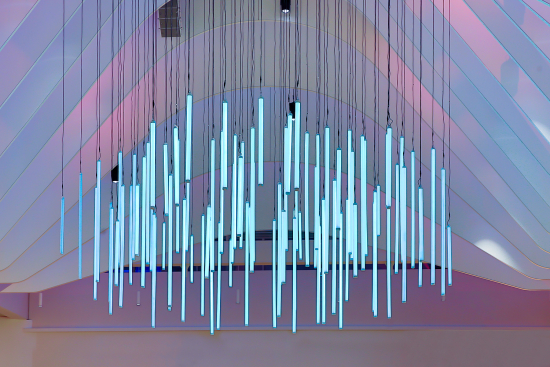