- Two strong leaders in their respective markets, each with a focused strategy, a dedicated management team, an independent Board of Directors, and an adequate financial structure:

- Contemplated project involves a prior reorganization expected to be completed during the second half of 2023 with listing and distribution of SpinCo shares by end of 2023  (1)
- Management to present its transformation plan under study at a Capital Markets Day, held today for analysts and investors.

Rodolphe Belmer, Chief Executive Officer of Atos, said: “Today we announce our intention to take the in-depth transformation of the Group, started at the beginning of the year, one step further. This potential new path for Atos would aim to optimize the two distinct markets that the Group operates in, both with fundamentally different dynamics: on the one hand, the infrastructure-driven, asset-led market, and, on the other hand, the digital applications and security driven market.

Separating these two businesses would create two companies, leaders in their respective segments with proven and recognized track records: Tech Foundations is a trusted partner of choice for managing and modernizing mission critical systems, broadly recognized by the market for leading positions in Digital Workplace and Hybrid Infrastructure; and SpinCo would be strategically positioned on the data & security markets, recognized as the worldwide leader in managed security and #3 in supercomputing.

By specializing in two businesses on different and equally attractive paths, each company would focus on what they do best for their customers, creating significant new investment capacity for both and giving both the chance for long term success, growth and achievement. I would like to thank our talented and dedicated employees, who have embarked on the Group’s transformation journey since the beginning of the year.”

Bertrand Meunier, Chairman of the Board of Directors of Atos, added: "Having examined a number of possible options, Atos’ Board of Directors is convinced that the envisioned project, presented today by the management, is the best possible for the Group, and would create the highest value for all Atos Stakeholders.”

The contemplated project would maximize value for all Atos’ stakeholders by:

Studying the creation of two strong leaders in their respective markets

SpinCo (Evidian) would be positioned in high growth markets, driven by the shift to public cloud, increasing need for cybersecurity, big data and analytics going mainstream, and the development of smart applications. SpinCo would be led by a seasoned management team with a successful track record, under the leadership of Philippe Oliva (and appointed deputy Group CEO in charge of the Digital/BDS perimeter) and Anil Agrawal as CFO. In 2021, the SpinCo perimeter generated €4.9 billion revenue, a 7.8% operating margin and a c. €150 million free cash flow before interest and tax. SpinCo would bring together two of Atos’ existing business lines:

SpinCo would benefit from strong commercial and managerial synergy opportunities between its two business lines, in particular with the fertilization of Digital’s customer base by BDS and with a joint go-to-market strategy. In total, SpinCo’s acceleration plan is expected to represent an investment of €0.4 billion over the next five years. This is expected to allow SpinCo to deliver c. 7% organic growth on average over 2022-2026 (starting from an expected €5.3 billion in 2022), to gradually improve its operating margin to 12% in 2026 and generate €700 million in free cash flow before interest and tax, corresponding to a 75% to 80% OMDA conversion3. SpinCo’s leverage target would be below 3.0x OMDA as of 2024.

TFCo (Atos) would consist of Atos’ Tech Foundations business line, focused on designing, building and managing complex and vital information systems worldwide. Led by Nourdine Bihmane (and appointed Group deputy CEO in charge of the Tech Foundations perimeter) and Darren Pilcher, CFO, Tech Foundations is positioned on the infrastructure and private cloud market, which is currently experiencing a mix shift from traditional to next generation infrastructure. With 48,000 employees2 across the world and serving more than 1,200 customers across geographies and industries, Tech Foundations generated, in 2021 (excluding UCC), €5.4 billion in revenue, a -1.1% operating margin and a €-507 million free cash flow before interest and tax (including an exceptional €-180 million cash out related to the funding of a restructuring plan in Germany and working capital normalization for around €-200 million).

In order to adapt to the shifting market trends described above, TFCo would implement an ambitious turnaround plan that would ultimately reposition the business for growth, profitability and cash generation. This plan, for a total cost of €1.1 billion over the 2022-2026 period, is articulated around 3 key steps:

TFCo is expected to generate c. €5.0 billion in revenue in 2022 (excluding UCC). As the turnaround plan is being executed, revenue is expected to decrease to c. €4.1 billion in 2024 before stabilizing in 2025 and resuming a growth trajectory form 2026 onwards. Operating margin is expected to turn positive in 2025 and to exceed 5% in 2026. Free cash flow before interest and tax is expected at €150 million in 2026 and growing around €50 million per year thereafter, which would enable TFCo to have a solid stand-alone path or participate in industry consolidation.

Should Atos decide to move forward with this project, the Group estimates its total funding needs for the 2022-2023 period, until the contemplated separation would become effective, to be around €1.6 billion. This amount of €1.6 billion is based on a €3.4 billion cash position as of December 2021 and a €2.8 billion minimum cash needed to run the Group’s operations as of December 2023, and takes into account:

This funding requirement is covered by the Group’s current liquidity at hand, and the Group is currently in advanced discussions with two of its financing banks.

After the completion of the contemplated separation, the capital structure of both Spin Co and TFCo would be designed to fit their respective financial profile and funding needs.

If it is decided to move forward with the project, the objective would be to complete the separation into two entities (involving a prior reorganization of the Group) during the second half of 2023, and to complete the listing and distribution of SpinCo shares by the end of 2023, according to the preferred scenario at this stage. Atos’ Board of Directors has approved the launch of the in-depth study of the contemplated transaction. The decision on this reorganization and separate listing project and its terms and conditions will be made after the ongoing in-depth analysis has been completed; it remains conditional on general market conditions and would be subject to customary processes, including governance bodies and shareholders’ approval as well as consultation with the relevant employee representative bodies. Further information on any significant developments in this respect will be made to the market in due time, in accordance with applicable regulations.

In the preferred scenario at this stage, Atos’ shareholders would retain their current shares of Atos and would receive SpinCo shares as in-kind distributions. SpinCo would be listed on the Euronext Paris stock exchange. After completion of the envisaged transaction, it is currently contemplated that Atos shareholders would hold 100% of TFCo and 70% of Spin Co. The remaining 30% stake in Spin Co would be held by TFCo and monetized over time to refinance TFCo’s turnaround costs.

While SpinCo and TFCo management teams will be fully dedicated to their day-to-day operations and the execution of their respective transformation plans, the potential separation process will be managed by a dedicated team led by Rodolphe Belmer, Atos Chief Executive Officer, alongside Diane Galbe, Atos Chief Strategy Officer.

Business trends at the date of this press release confirm revenue growth and free cash flow ranges and point towards the lower half of the operating margin range. 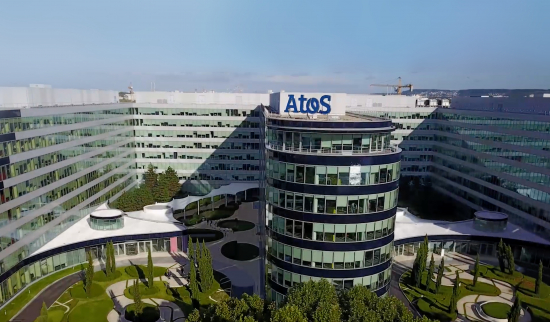 Atos is a global leader in digital transformation with 111,000 employees and annual revenue of c. € 11 billion. European number one in cybersecurity, cloud and high-performance computing, the Group provides tailored end-to-end solutions for all industries in 71 countries. A pioneer in decarbonization services and products, Atos is committed to a secure and decarbonized digital for its clients. Atos is a SE (Societas Europaea), listed on Euronext Paris and included in the CAC 40 ESG and Next 20 Paris Stock indexes.

The purpose of Atos is to help design the future of the information space. Its expertise and services support the development of knowledge, education and research in a multicultural approach and contribute to the development of scientific and technological excellence. Across the world, the Group enables its customers and employees, and members of societies at large to live, work and develop sustainably, in a safe and secure information space.

This document contains forward-looking statements that involve risks and uncertainties, including references, concerning the Group’s expected growth and profitability in the future which may significantly impact the expected performance indicated in the forward-looking statements. These risks and uncertainties are linked to factors out of the control of the Company and not precisely estimated, such as market conditions or competitor's behaviors. Any forward-looking statements made in this document are statements about Atos’s beliefs and expectations and should be evaluated as such. Forward-looking statements include statements that may relate to Atos’s plans, objectives, strategies, goals, future events, future revenues or synergies, or performance, and other information that is not historical information. Actual events or results may differ from those described in this document due to a number of risks and uncertainties that are described within the 2021 Universal Registration Document filed with the Autorité des marchés financiers (AMF) on April 6, 2022 under the registration number D.22-0247. Atos does not undertake, and specifically disclaims, any obligation or responsibility to update or amend any of the information above except as otherwise required by law.

This document includes information on specific transactions that shall be considered as projects only. In particular, any decision relating to the information or projects mentioned in this document and their terms and conditions will only be made after the ongoing in-depth analysis considering tax, legal, operational, finance, HR and all other relevant aspects has been completed, remains conditional on general market conditions and would be subject to the customary processes, including governance bodies and shareholders’ approval as well as consultation with the relevant employee representative bodies, in accordance with applicable laws and regulations.